I don’t know about you, but…

One of the toughest things in growing my business is marketing to a cold audience.

These guys haven’t heard about me before, so how on earth can I get them to try my services?

Do you ask this question too?

If you do, it’s your lucky day, because it turns out that the Facebook Lookalike Audience is the ultimate fire you need to turn any cold audience to warm leads.

And in this blog post, I’m going to show you how to use it step-by-step and share with you important principles to make it work.

Before that, let’s have a warm-up:

What is Lookalike Audience?

I’m sure you already have an idea about what a Lookalike Audience is based on its name, but just to set the records straight:

Facebook Lookalike Audience is a set of audience with similar attributes with your existing audiences.

This is a great illustration of how it works: 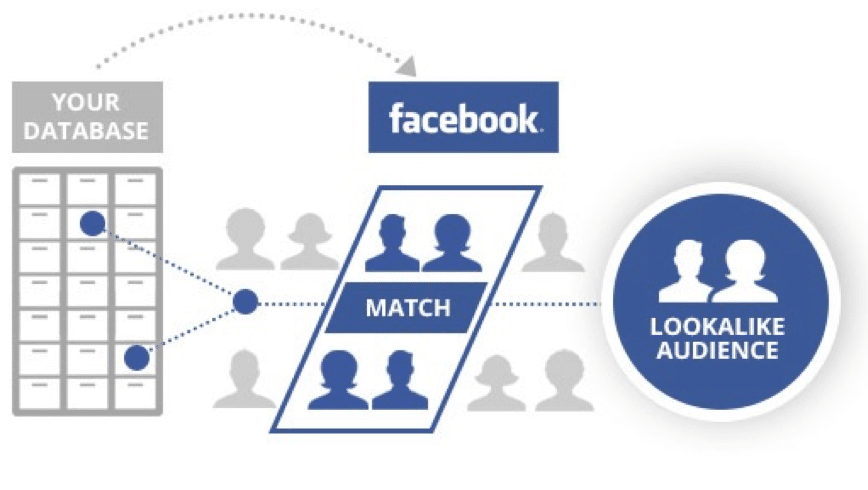 Say for example that you have an existing base of page fans.

There’s a good chance that people with the same demographics, behaviors, and interests with your page fans will be interested in knowing more about you, so…

You can tell Facebook to look for users with similar attributes with your page fans and target your ads to them.

This is why Lookalike Audience is a great tool if you want to get new interested leads as you expand your business. 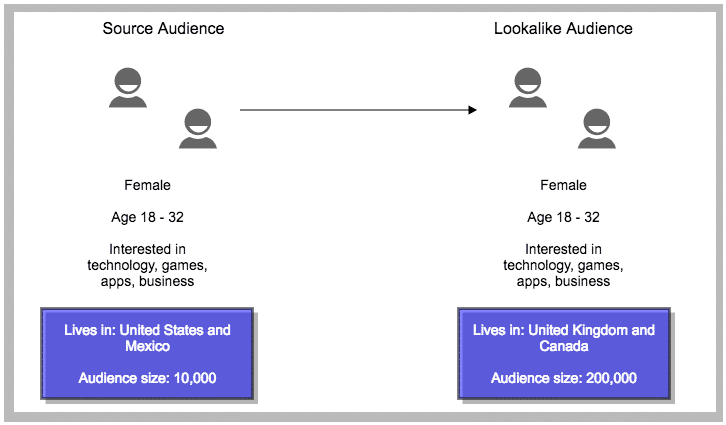 The fact is a brand new business with only a handful of existing customers can’t use Lookalike Audience just yet.

You can and should only build a Lookalike Audience if you:

Now that it’s out of the way, let’s get down to the nitty-gritty of building a Lookalike Audience.

The seed audience is simply the audience segment that you will copy to create a Lookalike Audience.

But just like farming, you can’t just use any seed.

You have to use the best ones to get the best yields. 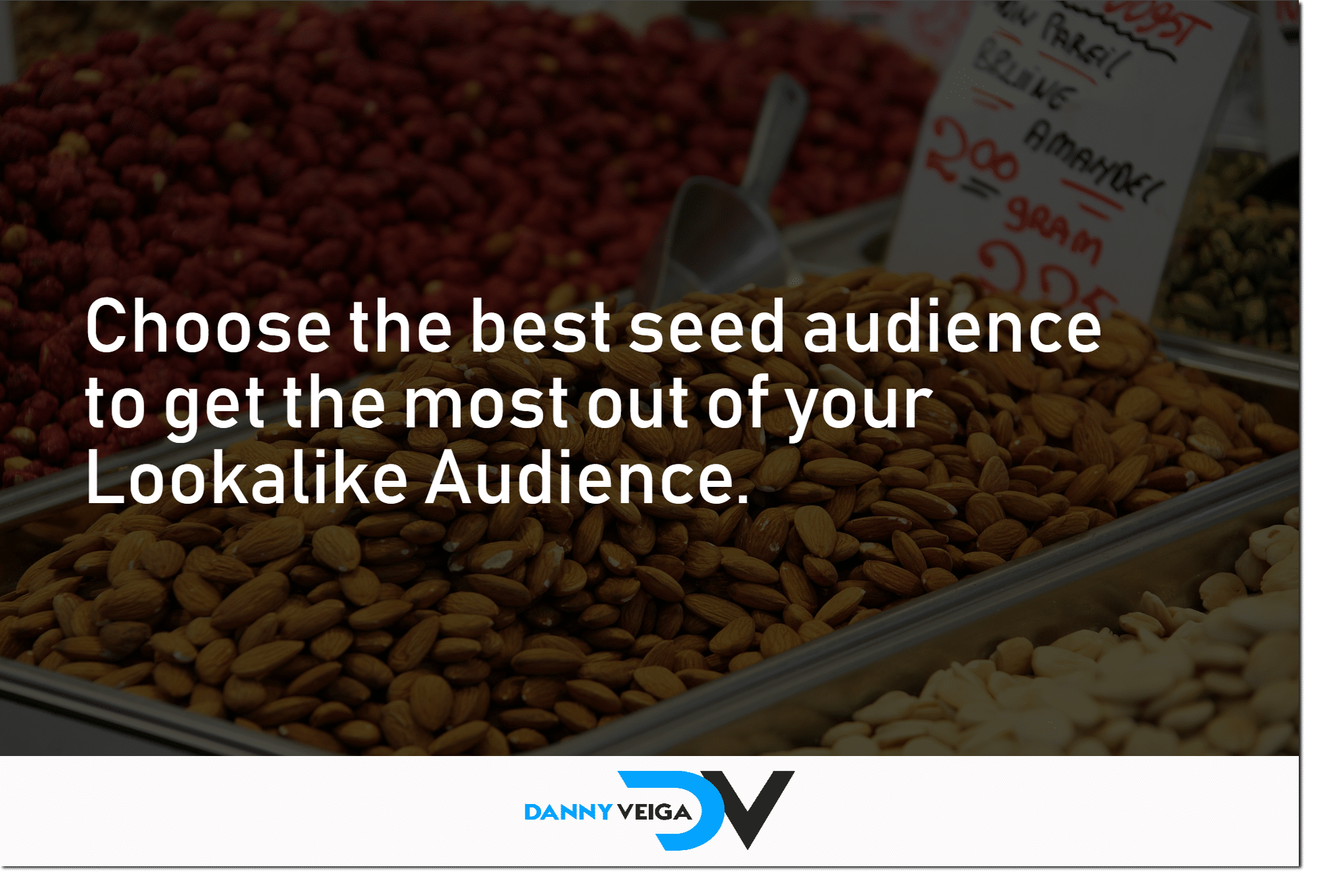 And the best ones are those that already took the action that you wanted them to.

If you have an existing record of website visitors, don’t just use everyone who lands on your website as your seed audience.

It’s a better idea to use those who signed up for your newsletter or those who landed on your checkout page.

Of course, this depends on the action that you want to encourage through your ads.

If you want to get more buyers in your e-commerce store, then using those who actually bought from you as your seed audience makes the most sense.

Although the minimum size for Facebook Lookalike Audience is 100, you should aim more than that to get better results.

And if your best audience segment is too big – around 500,000 or so (way to go!) – it’s better to break it down into smaller segments so you can hyper-target even more.

So if your website visitors who landed on your checkout page comprises of 70% women and 30% men, it’s a good idea to hone in women (or any other sub-segment that makes sense to your offer).

And if the population of the sub-segment is still too big, you can further segment it according to interests, behaviors, or locations.

Phase 2: Create a campaign with your target Lookalike Audience 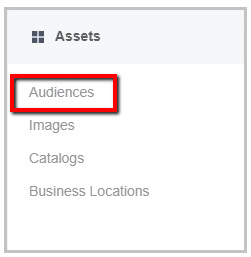 After that, you should see this: 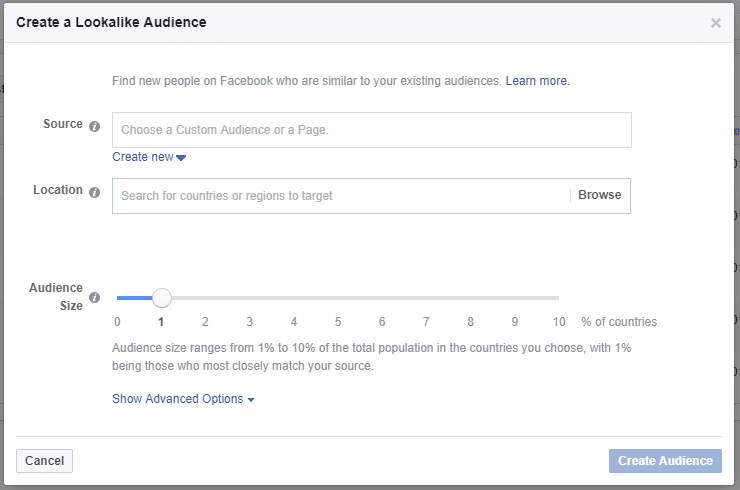 Let’s take a moment to look at everything we see here.

The “Source” is basically your seed audience. It’s what you’ll use as the basis for creating Facebook Lookalike Audiences.

There are two ways to select a source: 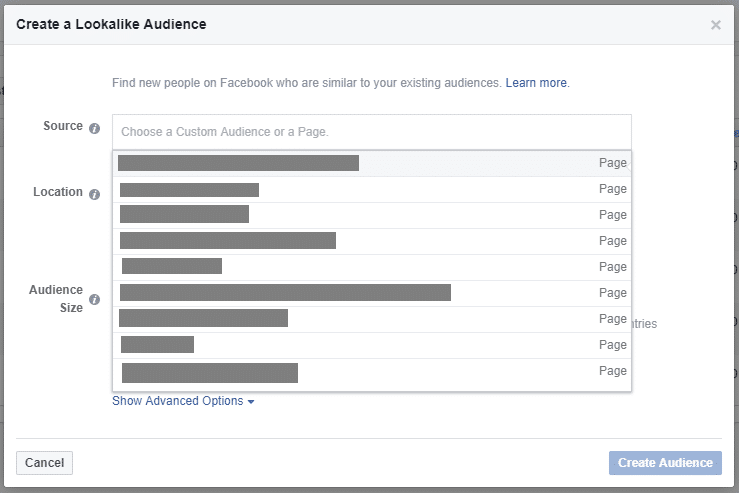 Select the Facebook page whose fans you want to use as your seed audience.

2. The second way to select a source is to click “Create New“: 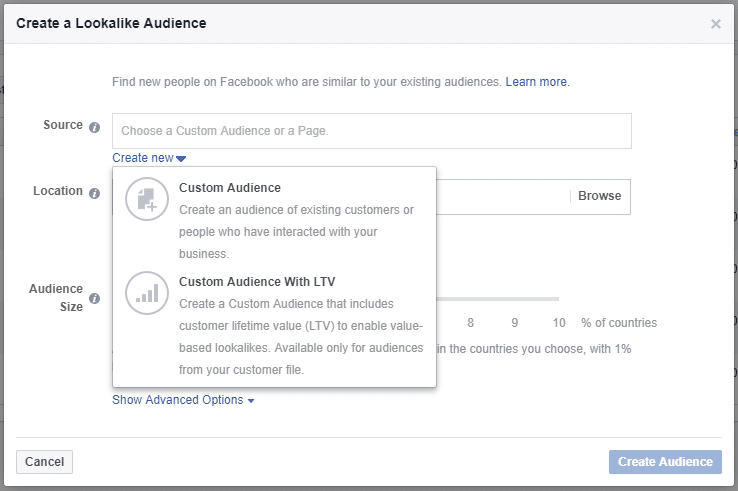 We’ll talk about the Custom Audience with LTV later.

Here’s what you should see: 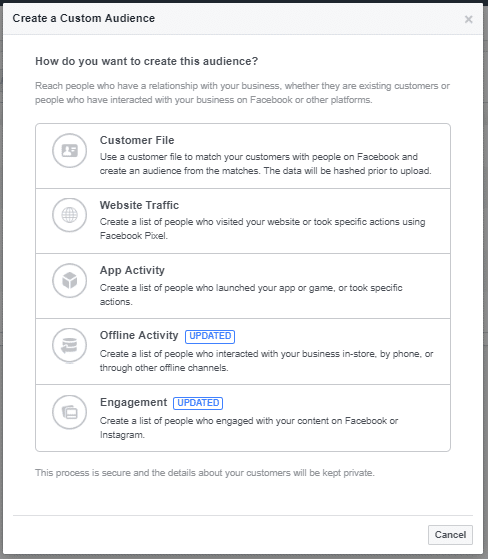 As you can see, you have five options for creating a Custom Audience, and this is where the fun begins.

You can use a:

Now let’s go to the other elements:

The “Location” is pretty much what it says: the location of your target audience.

You can select the country or a specific state or region depending on your goals.

And the “Audience Size” is shown in percentages with 1% being the lowest and 10% being the highest: 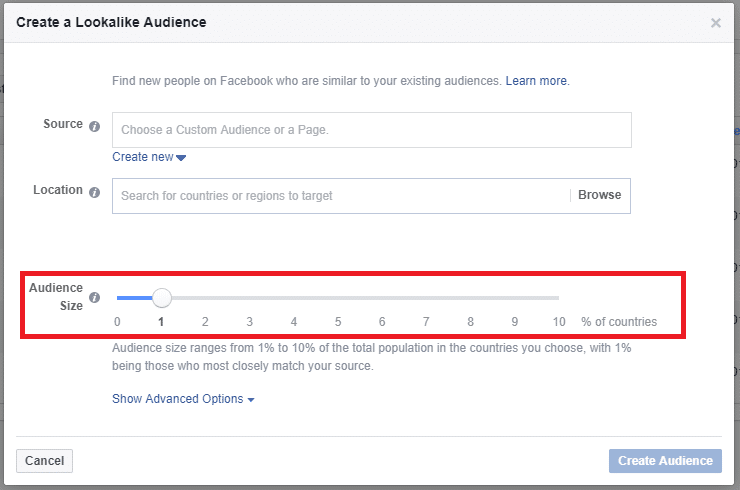 The interesting thing to note about Audience Size is it can greatly affect the performance of your ad.

AdEspresso guessed that the higher the percentage is, the poorer the performance will be.

But they wanted to know for sure, so they tested the size of their Lookalike Audience. 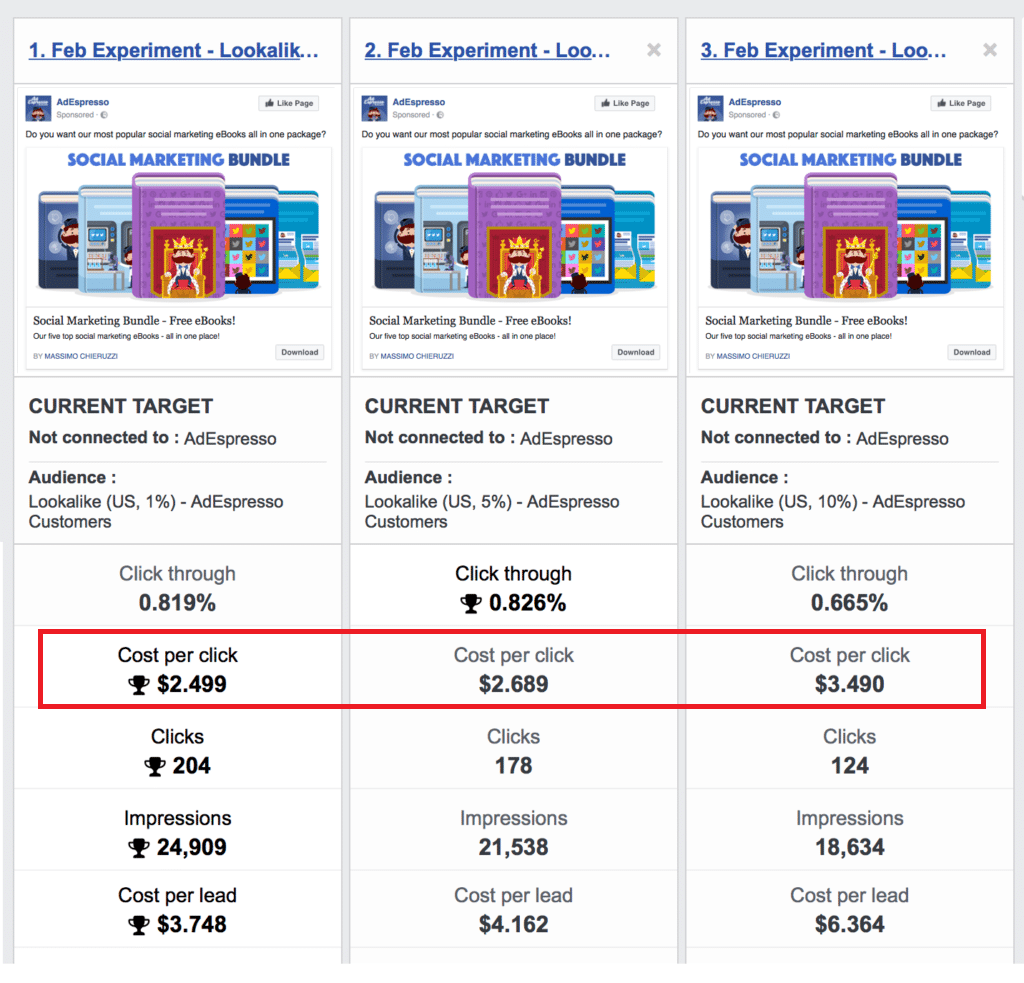 As you can see, the 1% audience size has the lowest CPC in the bunch. And it also has the best performance in terms of the other KPIs as well.

So AdEspresso stands by the results of this campaign:

The smaller the Lookalike Audience size is, the higher the ROI will be.

If you want to know for sure which audience segment (and the audience size) will produce the best ROI for your campaign, you can split test different segments.

Split testing is pretty easy to do.

When you create a campaign and have selected your objective, you’ll see this: 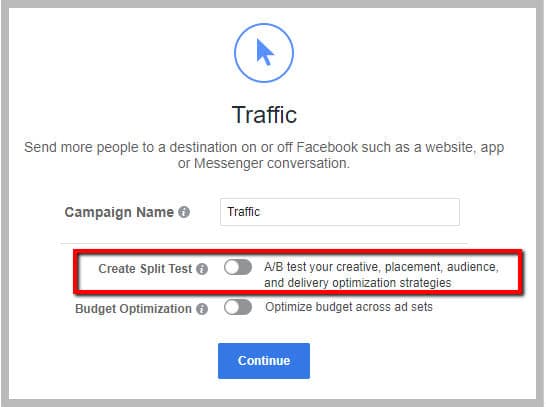 This option is available for all the campaign objectives except “Brand Awareness”.

Just switch it on, and you’ll then be taken to this page: 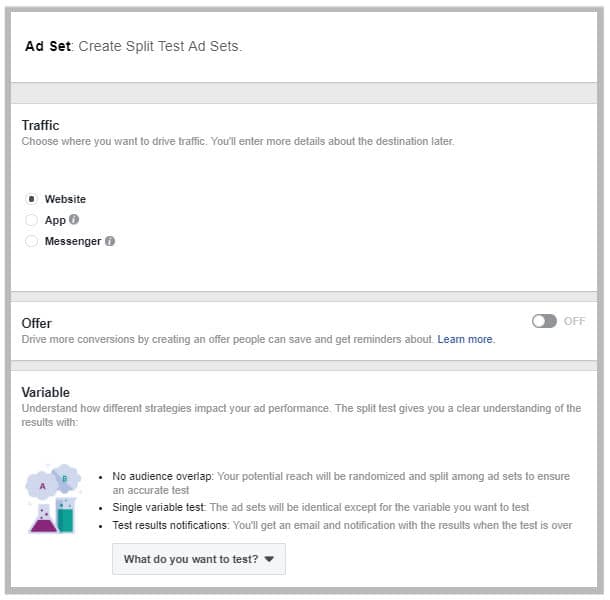 In the “Variable” section, click “What do you want to test?” and select “Audience”: 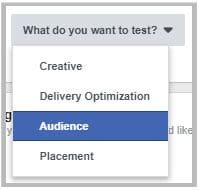 You will then be able to create two ads with different audiences.

IMPORTANT TIP: When creating an ad, keep in mind that you’re targeting a cold audience. So it’s a good idea to steer clear from direct offers and instead warm them up with a handshake and hello, which you can do by promoting a blog post, lead magnet, or something that lets them get to know you first.

Phase 3: Monitor and focus on the best performing audience segment

Running the split test for around 5-14 days should already give you clear results of which audience is performing best.

How do you know which is the best performing audience?

That depends on your campaign objective.

If you wanted to spread brand awareness, then “Reach” would be a good KPI.

The “Cost Per Result” is also a good KPI to track because it tells you which audience generates the desired action at the lowest cost.

Once you know the ad with the winning audience based on the most important KPIs for your objective, delete the other ad and focus your resources on the winning ad.

I’ve mentioned earlier that there are two ways to create a new audience source.

The truth is… not all customers are created equal.

Some are more valuable to your business than others in terms of their lifetime value.

If Customer A buys from you again and again, then this customer is more valuable than Customer B who buys once, never to be heard from again.

Let’s take a look at this example: 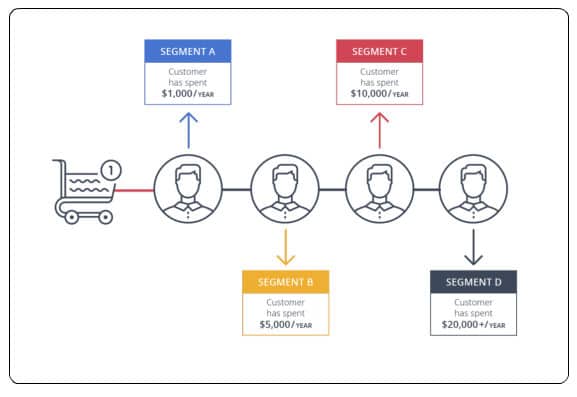 In this example, Segment A is the least profitable while Segment D is the most profitable.

Segment D, therefore, has the most lifetime value among all the segments.

If you were the owner of this business, which segment would you use to create a Facebook Lookalike Audience if you were hoping to get more high-value clients?

Is Lookalike Audience worth it? Will it give me a high ROI?

In the winter of 2013, Banana Republic faced a dilemma:

While they have millions of customers worldwide, their loyal customers are aging, and that’s not good at all.

So they decided that they needed new younger people to buy and possibly turn into their new set of loyal customers.

In partnership with Booyah! Advertising, Banana Republic decided to run a Facebook campaign to get new, younger customers who have not bought from them in the past. 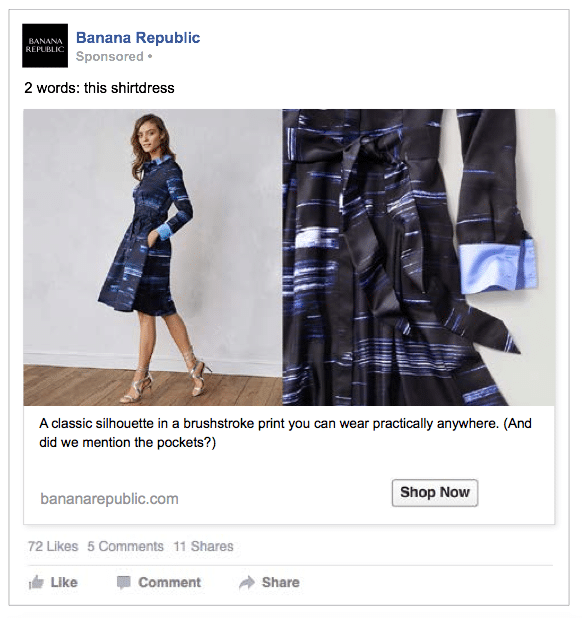 The situation called for the use of Lookalike Audience.

So they grabbed their list of young customers, divided it into segments, and paid particular attention to its top-spending segment.

They then used Facebook Lookalike Audience to find users with similar traits to their top-tier customers.

They targeted and tested a ton of ads for over a 3-month period to get the perfect ad that sends the message across and gives the most bang out of their buck.

At the end of the campaign, they found that they got almost four times return on its ad spend than via any other display advertising channels.

Their click-through rate with Lookalike Audiences was also higher by 60%.

Banana Republic was happy with the results, to say the least. 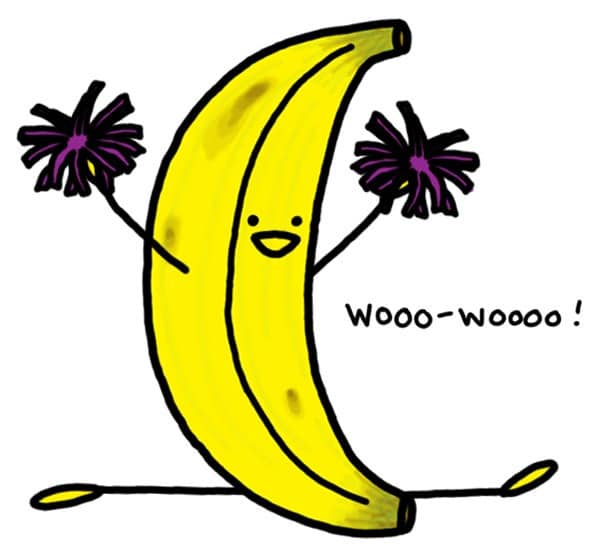 If we have key takeaways here, it would be these:

And that’s all you need to know to start building a Facebook Lookalike Audience.

How do you think Lookalike Audience can impact your business?

Or do you have any questions at all?