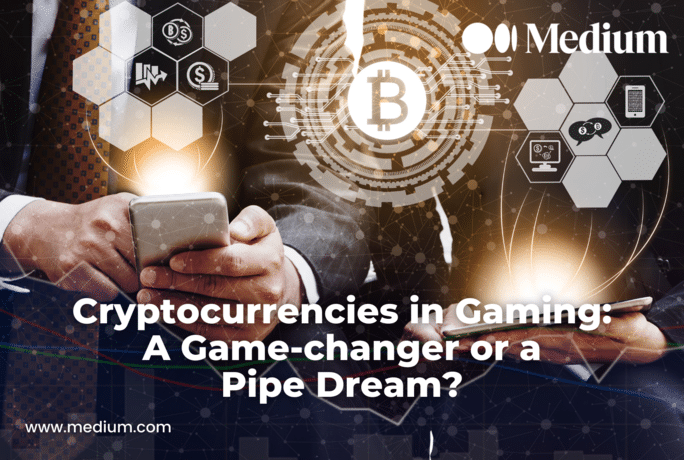 Cryptocurrencies are the new frontier. Bitcoin and Ethereum have become commonplace in recent years, with people using them to buy and sell goods and services worldwide. It has changed how we look at money: it is decentralized, anonymous, and largely unregulated…but what about gaming? Cryptocurrency is a game-changer for many reasons; we will explore those reasons below.

It is a form of decentralized digital currency that works through blockchain technology. They usually have no central governing system and rely on peer-to-peer transactions instead. It allows for quick, anonymous exchanges without bank services or other financial intermediaries between parties. The most well-known cryptocurrency is Bitcoin. Cryptocurrencies can be used for a variety of reasons, including Gaming.

What does Cryptocurrency mean for gaming?

– Gamers have access to a wider market. It allows gamers from all over the world to participate in an open, decentralized economy. This means that players with less popular currencies (such as India’s Rupee) will be able to play and buy games easily without worrying about having a more popular currency. It also gives gamers access to digital goods that are not available in their region – for example, Chinese players can purchase items from American or European servers without worrying about censorship or foreign transaction fees.

– It also allows developers to have better control over virtual economies and player retention. When it comes to managing virtual economies, Developers have more control over the market. Also, allow player better retention by creating a larger gameplay economy. Having an in-game currency means that players can spend their money on new games or cosmetic items instead of spending it outside of the game.

– Cryptocurrencies are changing how we look at microtransactions and downloadable content. It gives gamers the option to buy in-game items with ease, allowing them to purchase cosmetic items like skins or new characters without having to spend more money outside of the game. It also allows faster transactions; instead of waiting days for a bank transfer or using third-party services, the players exchange goods and services quickly without worrying about fees or other issues that come with fiat currencies. In the gaming world, this is a major development for the industry as a whole, allowing both gamers and developers unprecedented access to new markets around the world.

– Cryptocurrencies are still relatively unknown compared to traditional payment methods like PayPal and credit cards. It’s relatively unknown compared to other payment methods, which means that most people around the world cannot use them yet for gaming purposes. Cryptocurrency is also volatile in terms of value; it goes up and down frequently depending on market conditions. This can make Cryptocurrency difficult to work with when dealing with things like supply and demand. Cryptocurrencies in gaming may also be complicated to integrate into games, which is why CryptoKitties has its marketplace instead of using a traditional currency like the United States Dollar (USD).

– Cryptocurrency allows for easy cross-border payments without worrying about foreign transaction fees or exchange rates. It does not care about borders; Cryptocurrency allows gamers from all over the world to gather and participate in an open, decentralized economy. It also makes it more manageable for developers to manage virtual economies since they do not have to worry as much about exchange rates or fees involved with international banking and money transfers.

– Cryptocurrencies provide more ways for players to participate in games. This currency allows gamers to participate in several different ways, whether that’s purchasing new skins or having the ability to purchase items from other regions of the world without worrying about foreign transaction fees or censorship. Transactions are much faster; because CryptoKitties only uses Ethereum (ETH). Players can exchange goods and services quickly without having to worry about waiting for a bank transfer or using third-party services. Cryptocurrencies in gaming are a major development for the industry as a whole, allowing both gamers and developers unprecedented access to new markets around the world.

Conclusion: Cryptocurrency is not a game-changer or pipe dream, but it can be beneficial for the gaming industry. Blockchain provides many benefits for the gaming industry that will benefit both publishers and players. It will create opportunities for new and innovative games that would not be accessible otherwise. It will drive the industry forward and create a new level of transparency, which will encourage people to buy and support games that they feel confident about. This is a great place to start for anyone who wants to learn more about how cryptocurrency will affect the gaming industry.

Cryptocurrencies in gaming are a major development for the industry as a whole, allowing both gamers and developers unprecedented access to new markets around the world. There will be many barriers and obstacles in the gaming industry to overcome before cryptocurrency becomes mainstream, but it’s still interesting to think about. We also hope that this article on cryptocurrency has encouraged you to think about the future of cryptocurrency.